The homes in the Granada Heights Neighborhood began appearing after it was platted in 1925, just east & south of the commercial center of Nob Hill. Most of the compact, 12-block area sits on the eastern slope of the Nob Hill, allowing many residences sweet Sandia Mountain views as backdrop, & itinerant scenes of the San Mateo/Central Ave Bank Building high-rise to the east. The neighborhood starts at Carlisle Blvd & Silver Ave, & heads south to the southern edge of Nob Hill at Garfield Ave. From there it runs east only four blocks to Morningside Drive, then back up to Silver Ave, forming a perfect rectangle.

The lots that make up the original residential section of Granada Heights tend to be larger than other Nob Hill Neighborhoods. The homes are also generally pretty grand, like this modern Pueblo Revival, sitting up on the hill. Clearly the Spanish Pueblo Revival style is big in the few blocks, with a specimen here, & another with the requisite viga beams & rough columns, is also built with generous-sized rooms. Another great example of a more grand-built home is this modern Streamline Moderne, with rooftop railing.

A pretty fabulous Grande Dame Art Deco-era Streamline Moderne home sits on another (wooded) hill, overlooking the Metro to the east. Another, perhaps more famous Streamline Moderne home is the futuristic Kelvinator House, from 1938. Albuquerque Modernism has a great article on that World’s Fair home, which is still thriving in the Granada Heights neighborhood of Nob Hill.

As with all of the Nob Hill Neighborhoods, Granada Heights has numerous backyard casitas that were created over the decades, evolving from small, detached garages. Accessed by a side-yard driveway, these mostly flat-roofed apartments were originally 20’x12’ spaces for a single car. Many became one bedroom/one bath studios, often used by family members or rented to UNM students.

An integral part of the Nob Hill fabric, compact accessory dwelling units (ADUs) have been providing small incomes for property owners for decades. A passive income of $400-$1000 to rent a converted backyard garage can be a huge boost to the property owner. Because the garage footprint is already there, is not as difficult to turn it into an ADU, as opposed to pouring a foundation & creating a new casita from scratch.

Over the decades, the slow, measured infill with backyard casitas & garage conversion ADUs have allowed more folks to live in the area; neighborhoods are strengthened by these housing opportunities. That unhurried infill also provides housing to lower income residents. Nob Hill continues to be a desirable place to call home; including residents of all income levels is important to ensure the continued health of the neighborhood.

The Nob Hill Neighborhoods do not allow for the addition of any more accessory dwelling units, so garage conversions into small apartments has stopped. Many converted garages that were established rental units for almost 100 years were grandfathered in; many were not, & were zoned out of existence.

Luckily, comfortably evolving with the times, over the decades Granada Heights developed more dense residential housing—smartly, the closer to the Central Ave/Route 66 corridor & public transportation, the more dense the housing becomes. In 2005, the Aliso (Silver Street) Townhomes were built on an infill site overlooking Morningside Park. It consisted simply of two rows of contemporary condos, facing across a newly-planted courtyard. Years later, the tended-to landscapes have created amazing courtyard gardens.

A few years later Aliso Two was built, encouraging more folks to utilize Morningside Park next door. A Grower’s Market sprung up since then & home values in the area have also.

Granada Heights has both of the only parks in the Nob Hill Neighborhoods. Morningside Park is almost 1.4 acres & has mature 80+-year-old shade trees. A corner pocket park called Sasser Green sits across Lead Avenue from Morningside Park. Although small, it is a great buffer against the one-way Lead Ave street traffic, as you wander into that part of Granada Heights. There is a Little Free Library in the neighborhood, too.

As there are no alleys, properties are set back on the lots, leaving plenty of front yard space for greenscape plantings. Many of the front yards have become neighborhood showpieces, often with fabulously landscaped front yard gardens, some with nice additions of sculptures, others even designated as local wildlife habitat.

As you are walking, numerous greenspace parks & many smaller pocket parks exist just south of Granada Heights, in the Ridgecrest & Southeast Heights Neighborhoods. 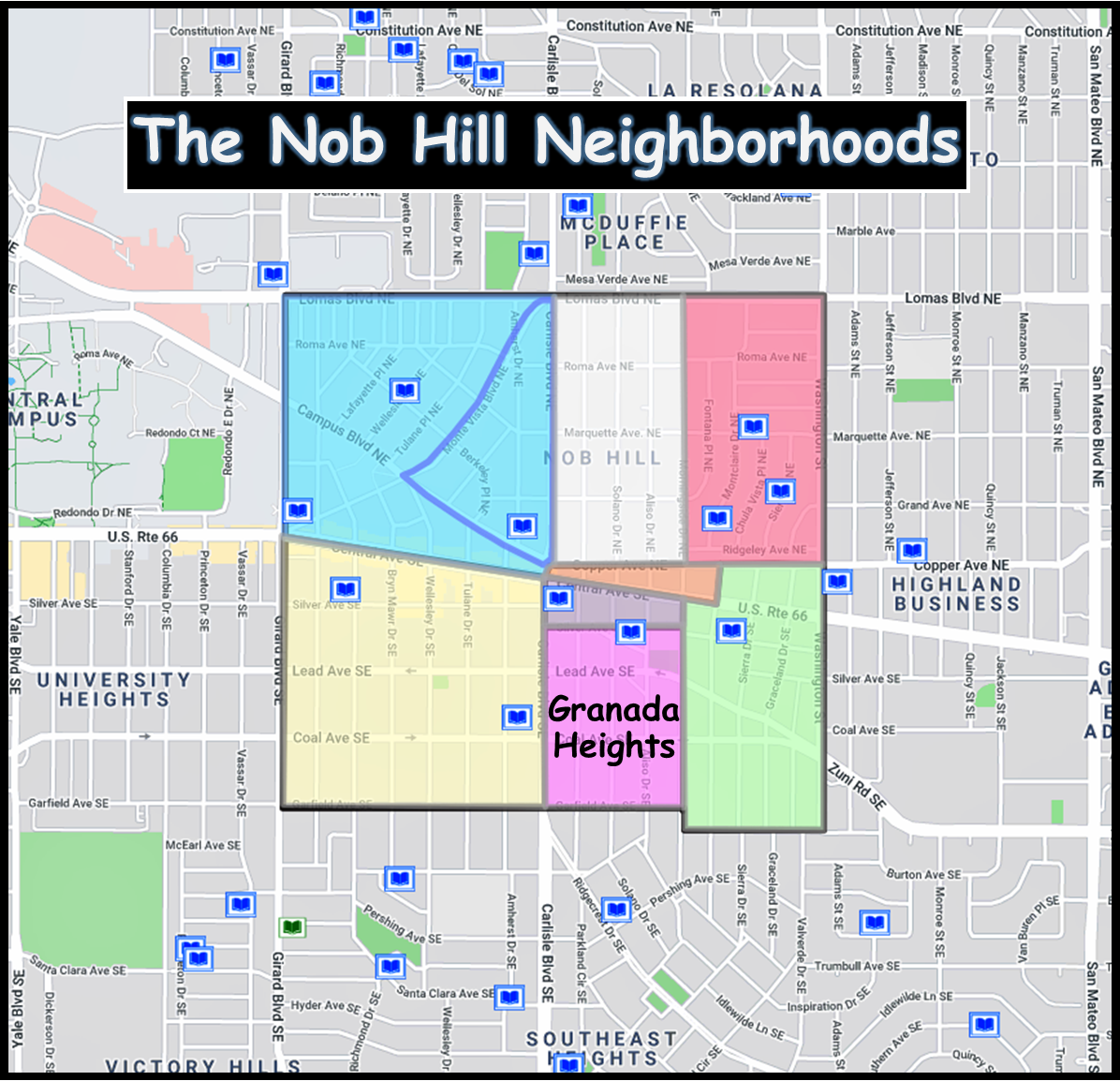 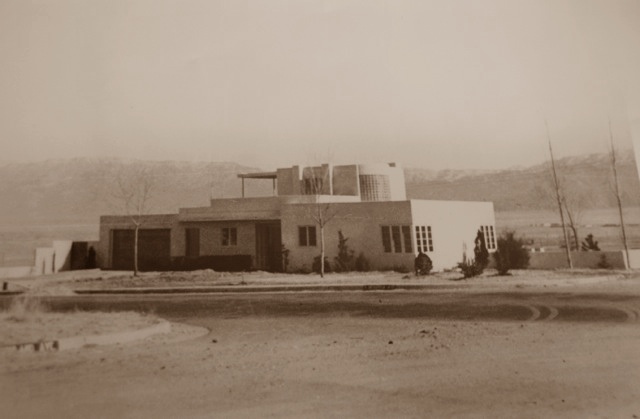 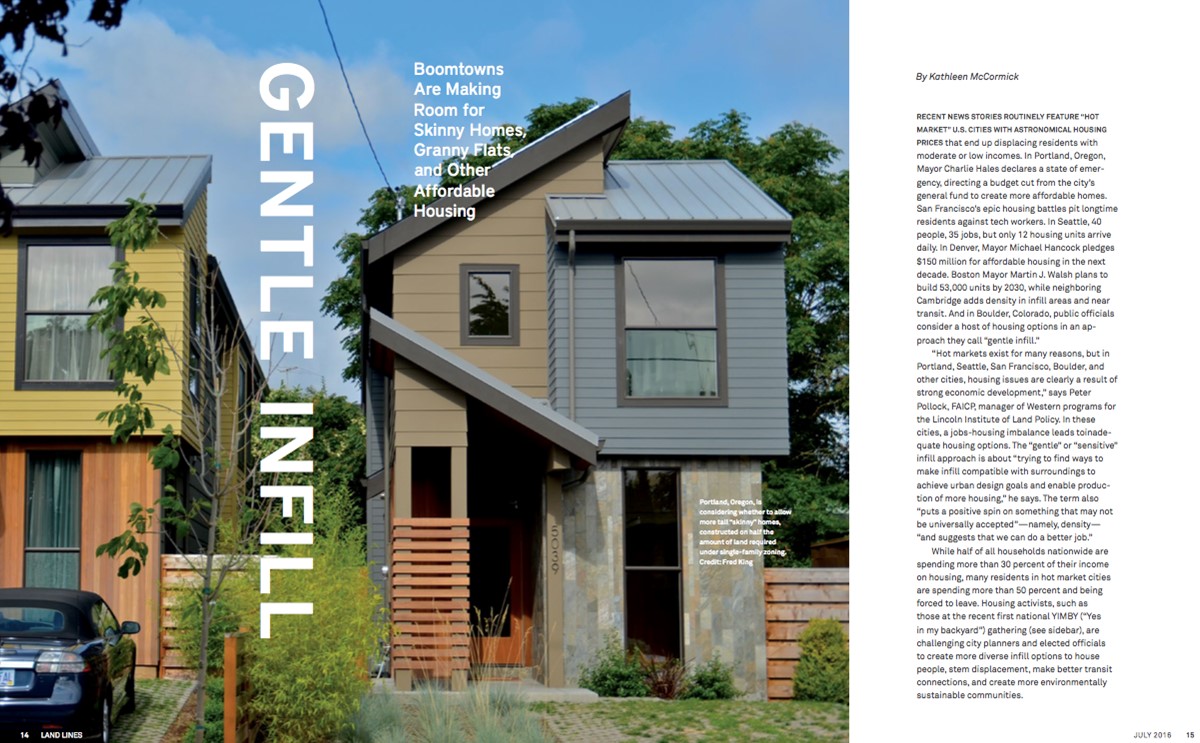 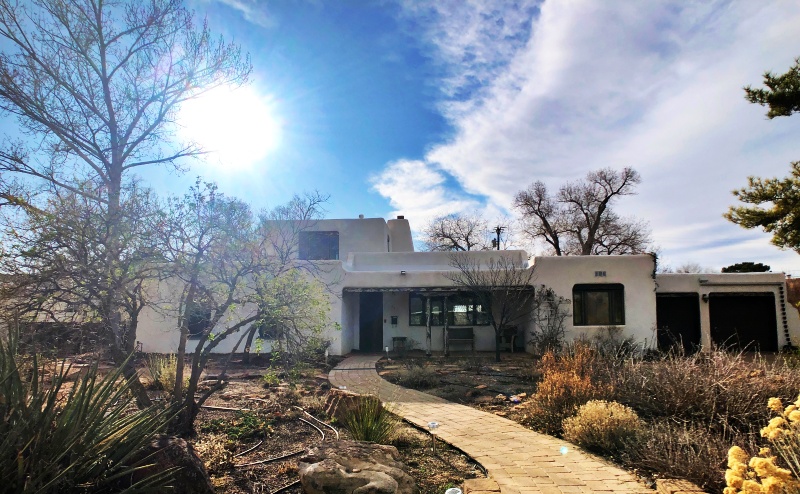 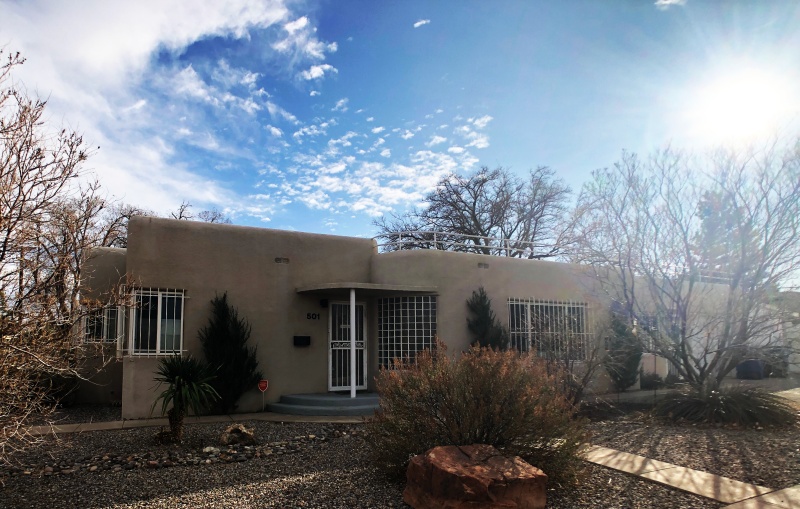 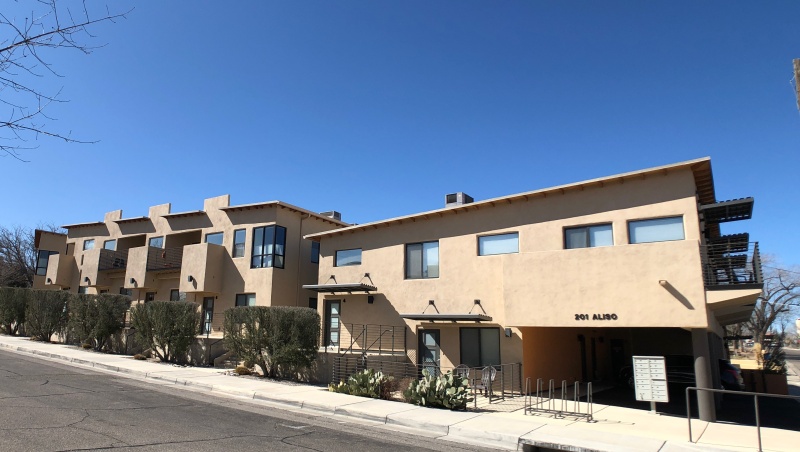 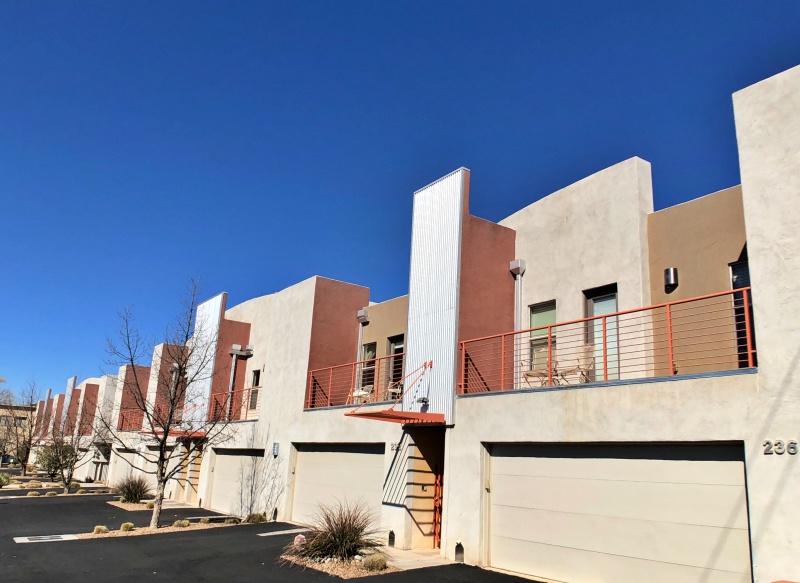 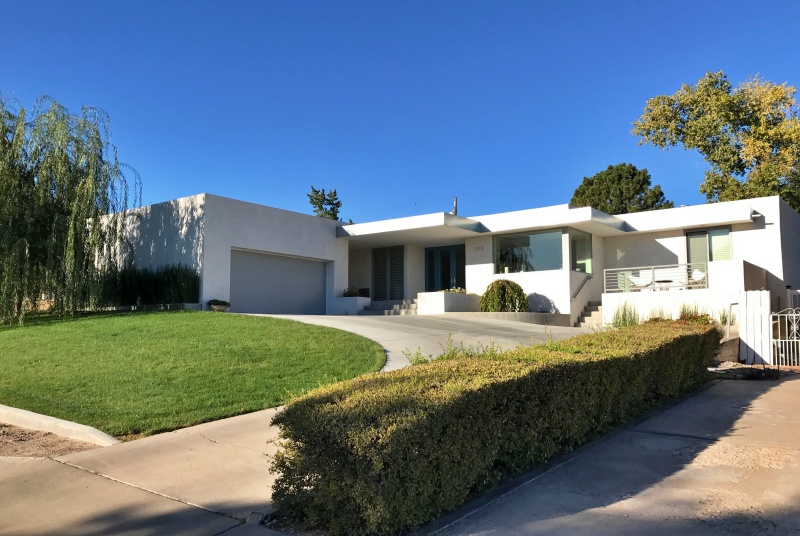 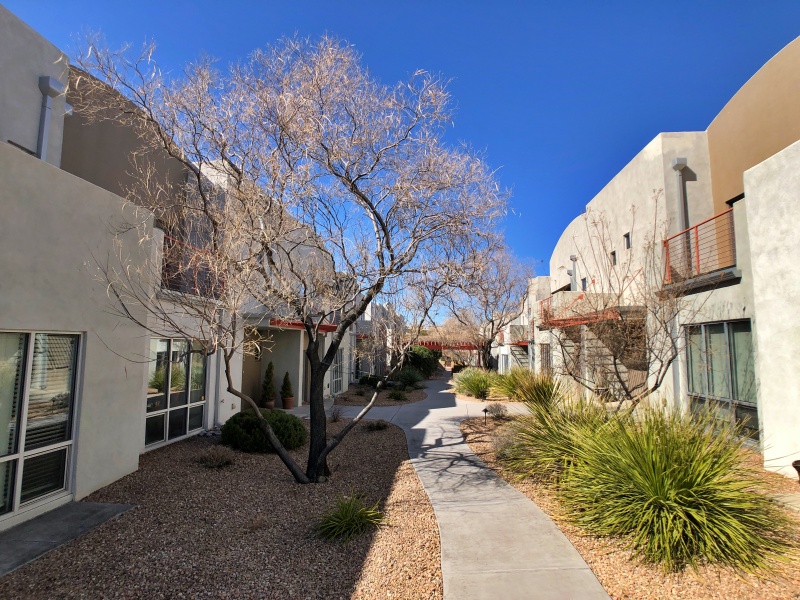 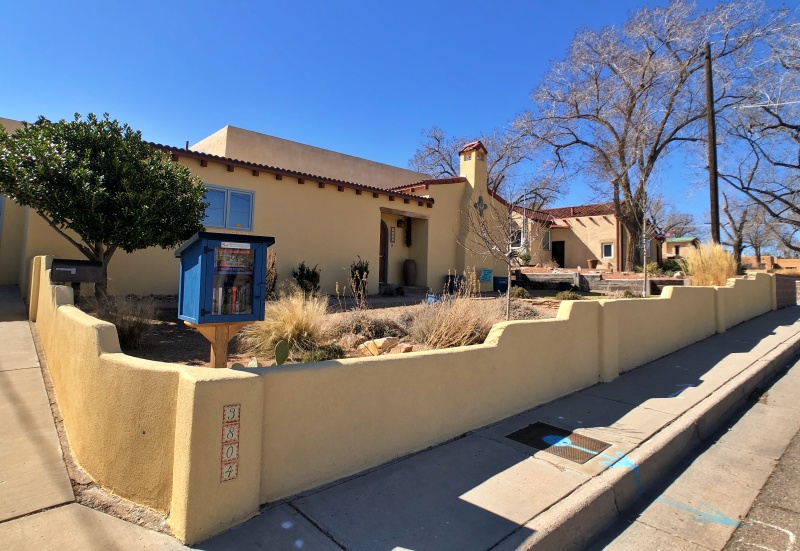 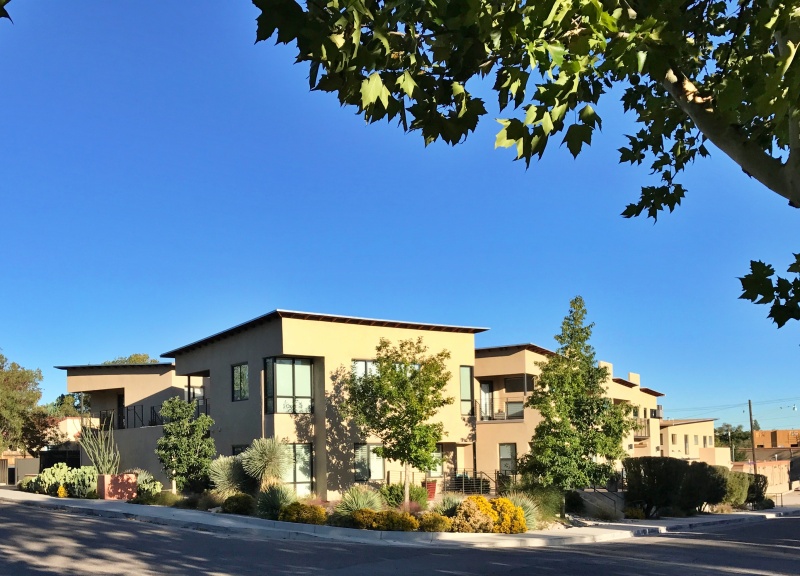 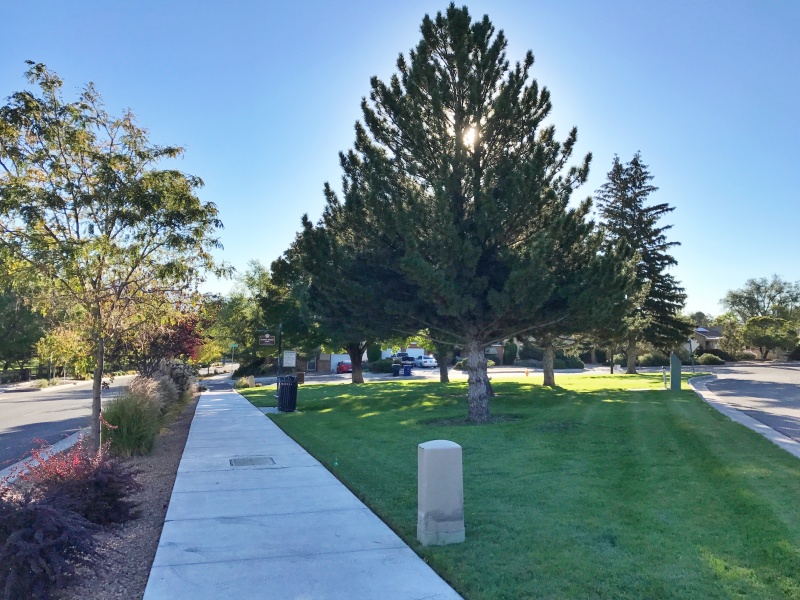 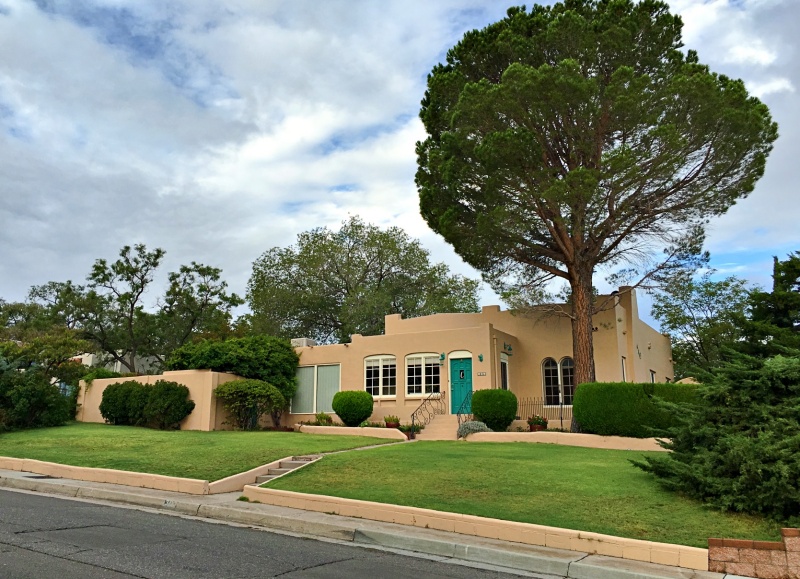 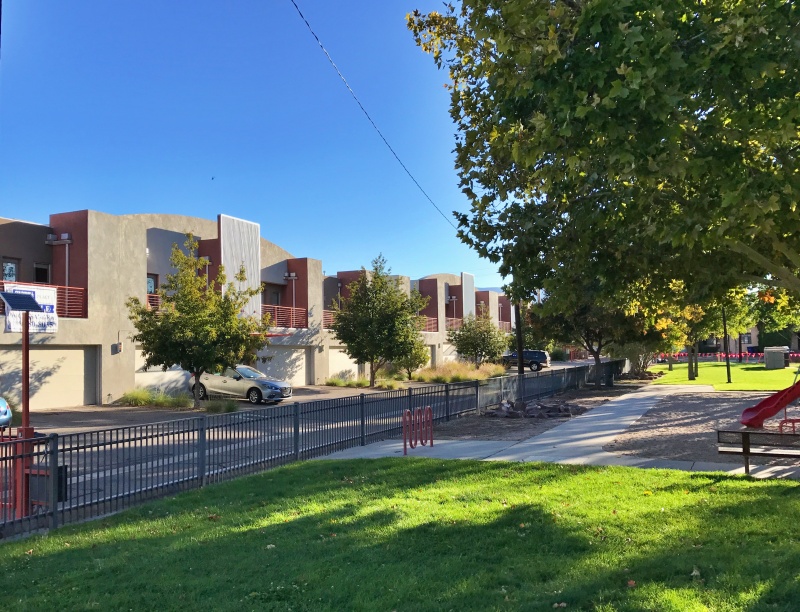 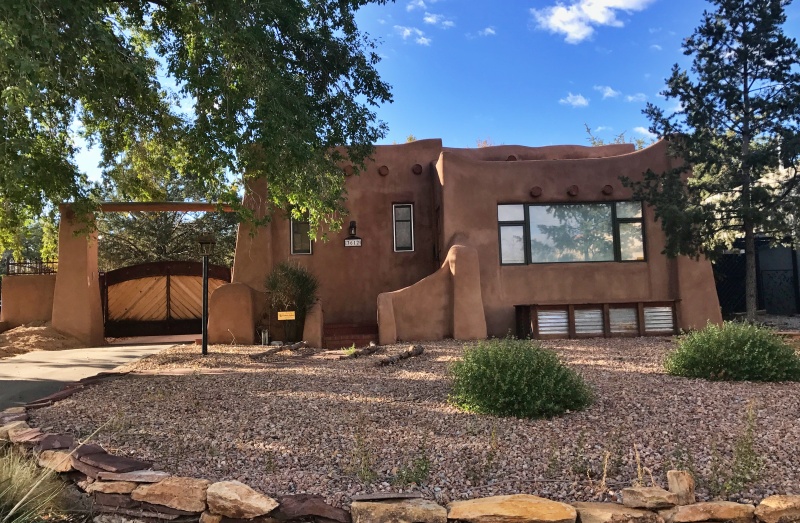 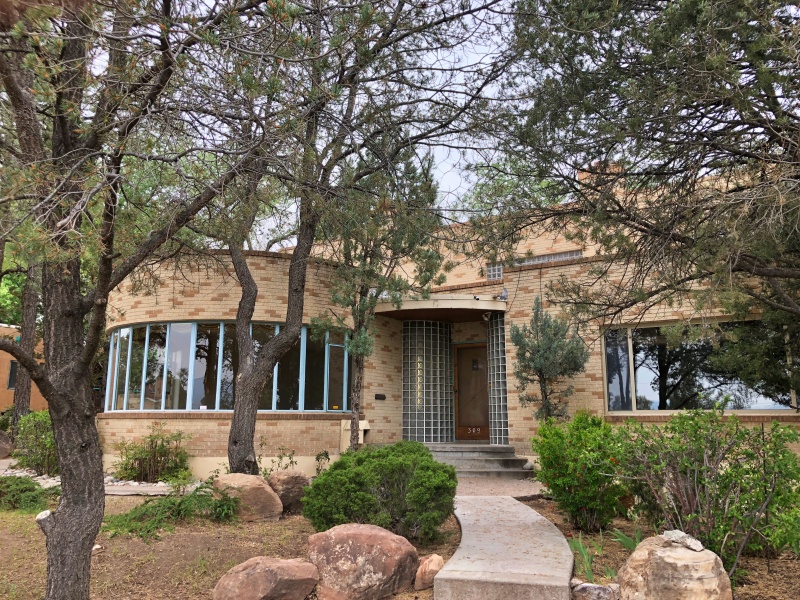 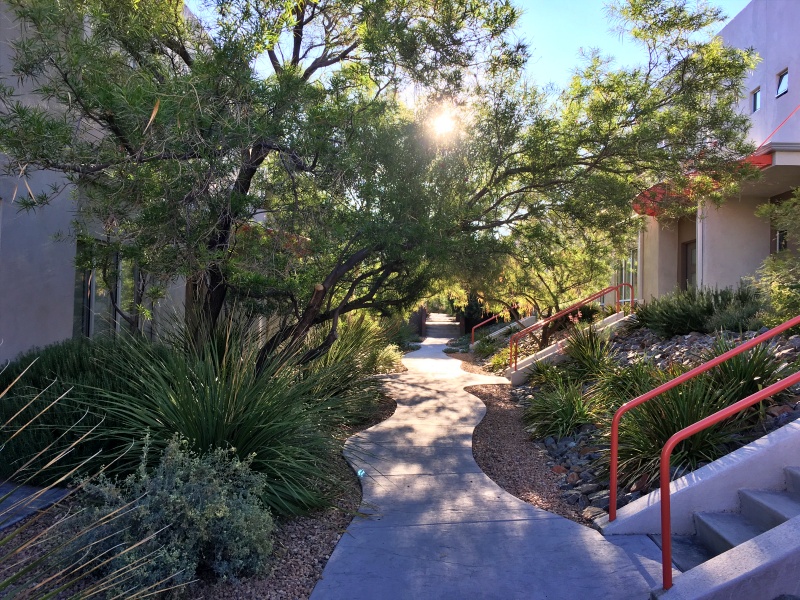 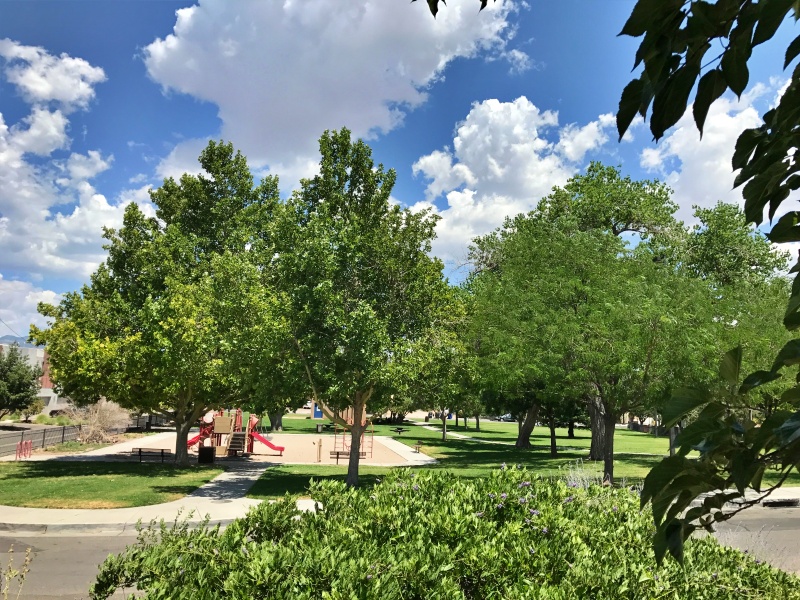 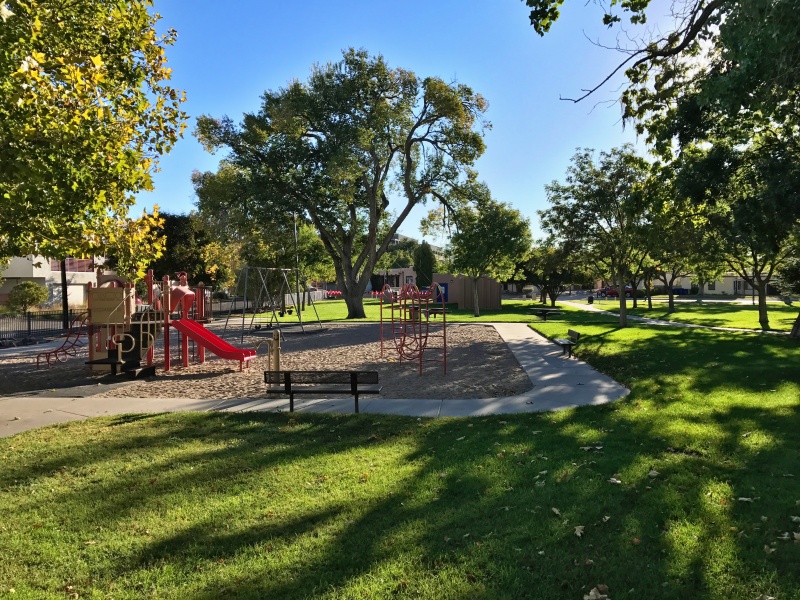 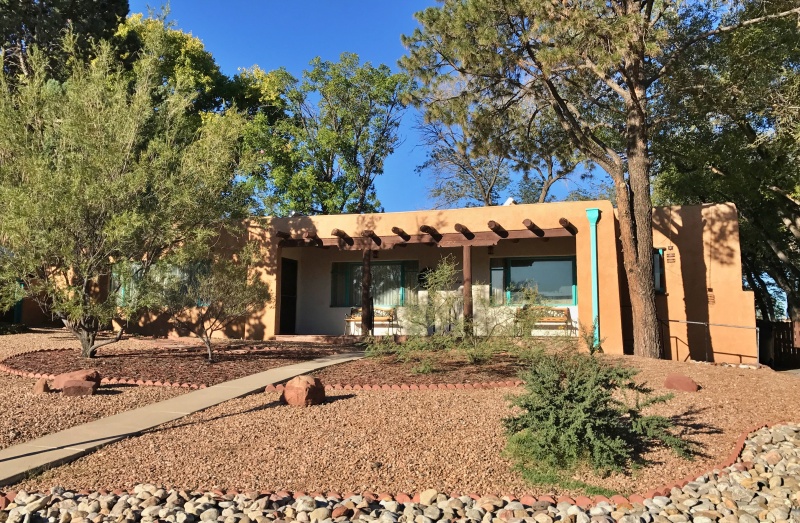 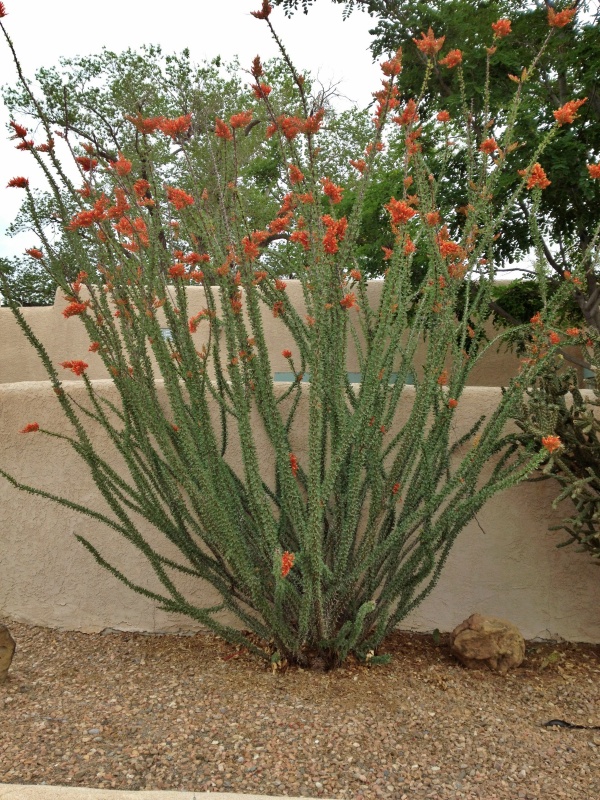 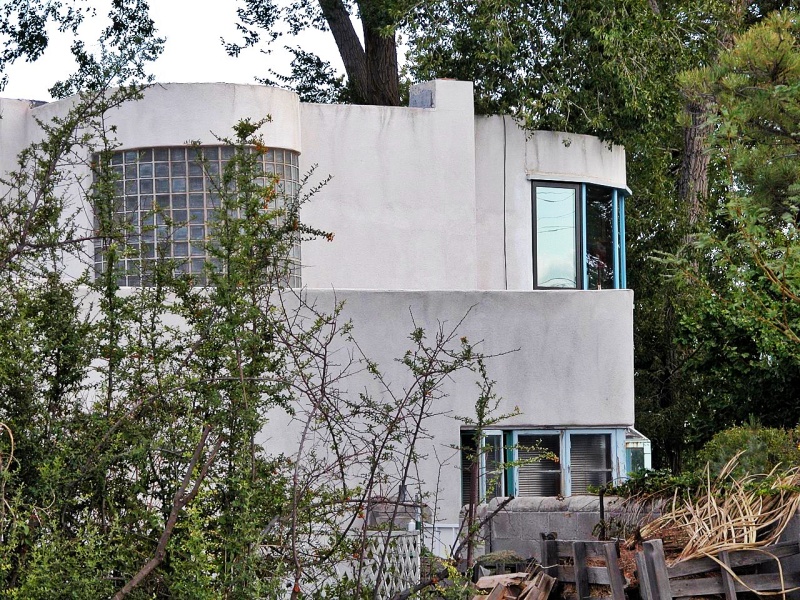 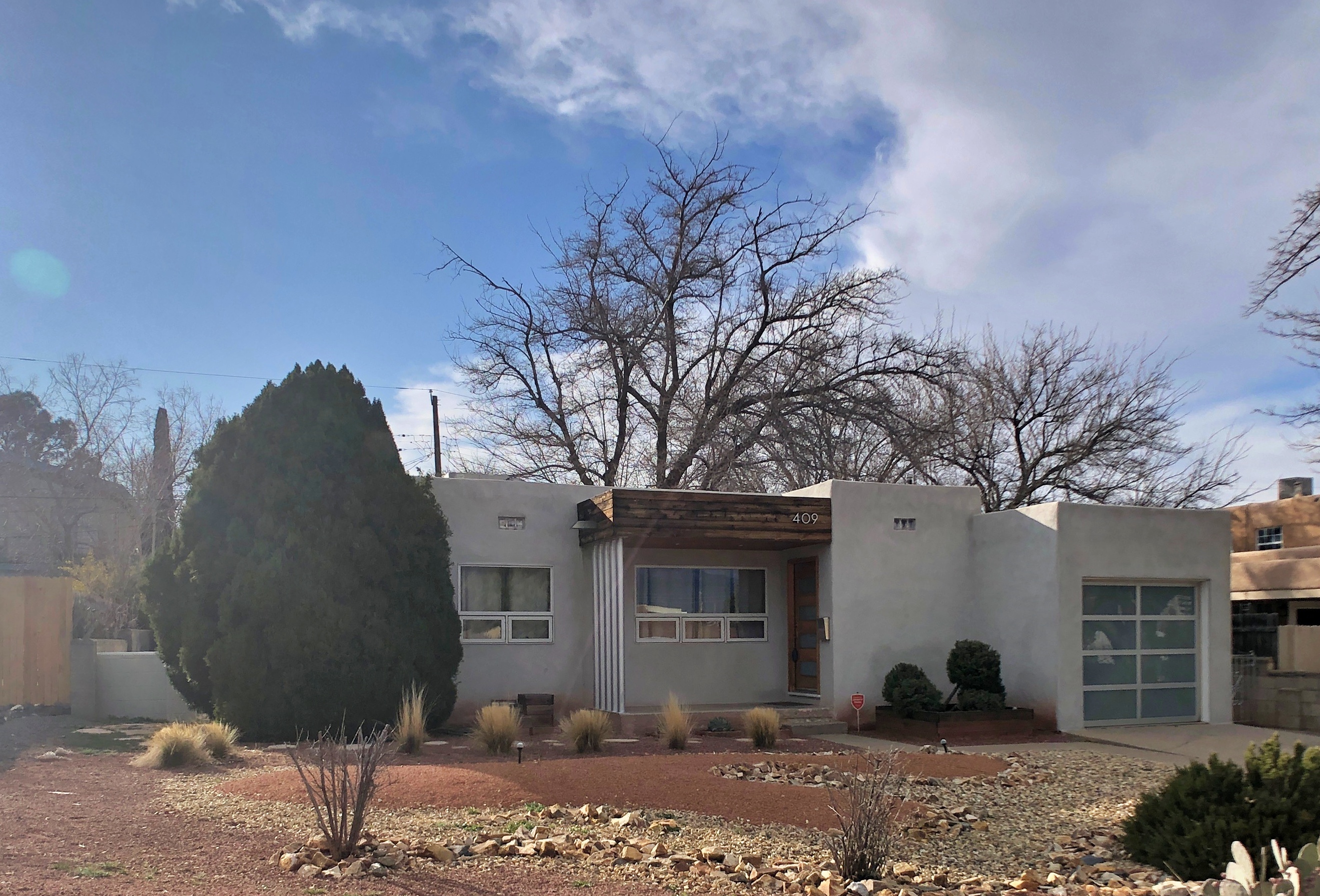 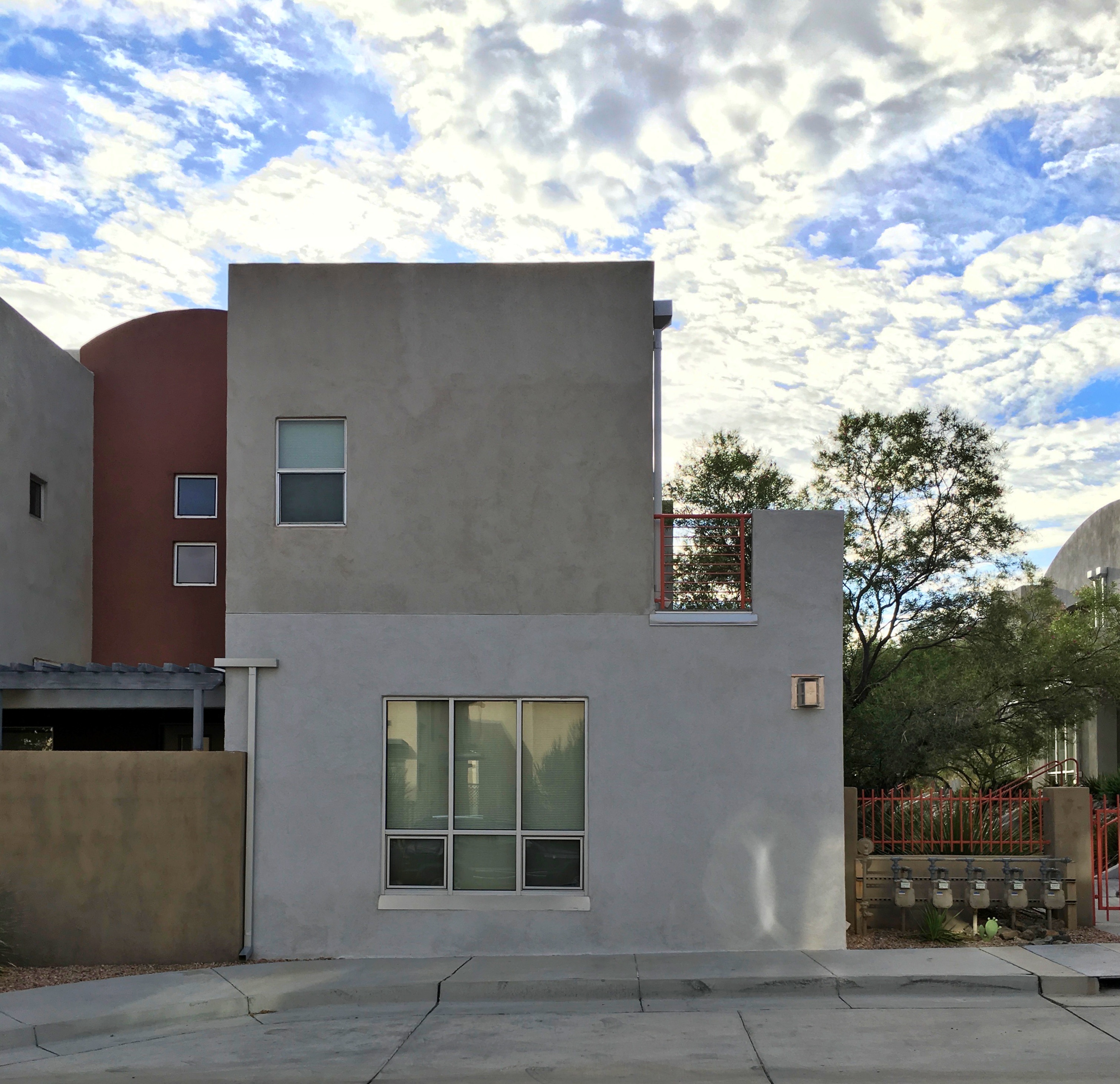 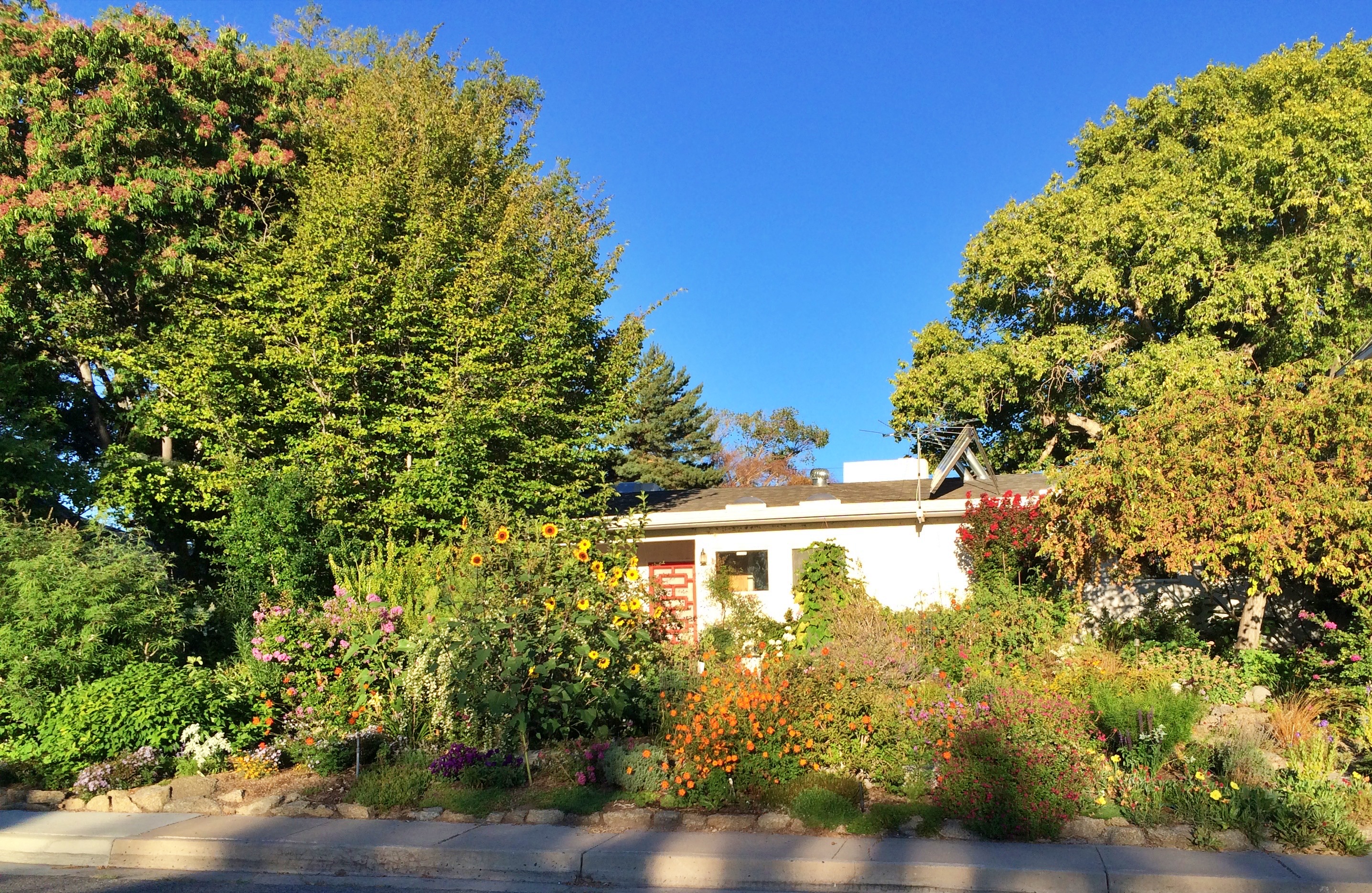